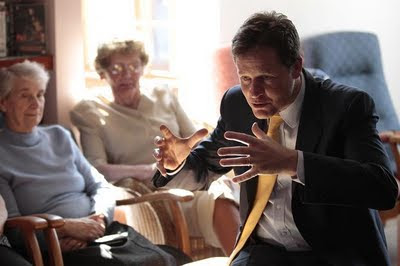 An artful politician usually knows how to work a room, but  yesterday Nick Clegg found to his cost that a coffee lounge-full of quick-witted  pensioners is far less pliable that than a convention of  captains of industry.
Just two hours into his first foray into the Scottish election campaign, it took a 78-year-old widow, in a sheltered housing scheme in Edinbugh, to spell out the simple truth that has kept the Lib Dems bouncing near the bottom of the polls, at about 8 per cent of the vote.
“Getting together, with the Conservatives,” Terry Gillan, told the deputy prime minister, with a sad shake of her head. “You’ve lost a lot of people with that.”
Mr Clegg had been anticipating the point, but  his shimmering sincerity, that worked such wonders over the airwaves in  last year’s television debates, soon lost its sheen at close quarters, among the tea cups and scones.
“We couldn’t have gone into a coalition with Labour, we didn’t have the votes,” he told Mrs Gillan. “The alternative would have been to throw our hands in the air, the country wouldn’t have a government and we have another election in a few months.
In other words, we had to deal with the Conservatives, for your sake. Mrs Gillan’s stony expression, and those of her senior  comrades, suggested they thought  Mr Clegg had  quite simply chosen the wrong party to play deputy prime minister with: he couldn’t count on their votes.
Earlier in the morning the Lib Dem leader had  a much easier ride at a business breakfast served up by the Scottish Council for Development and Industry, where the audience at least had more sympathy with his economic arguments.
Mr Clegg still came  under pressure, particularly from people with oil interests, appalled by George Osborne’s budgetry raid on their profits.  But in these more comfortable circumstances he was adept enough to acknowledge  concerns, and to justify the government raid - he claimed he had to keep prices down on the forecourt - in terms that had even his critics thoughtfully rubbing their double chins.
Liberal activists in Central Edinburgh had probably reasoned Mr Clegg would receive the same tolerant welcome among the pensioners of  affluent Stockbridge.
These days, this  urban village is often compared to Chelsea in London, but that discription only tells part of the story.   Not so long ago,  the area was  a good deal dustier and a few veterans of Stockbridge past have found their way into Veitch’s Square housing development.
Mrs Gillan was one - “I wasn’t a redhead for nothing” - but she was far from being the only sceptic in the room. And if these voters harboured any reservations about getting torn into the deputy prime minister, he dispelled them himself by sounding just the weeniest bit patronising in his opening remarks about pensions.
“The pensions minister, someone called Dr Steve Webb, Professor Steve Webb actually, has been working on this idea for ages,”  said Mr Clegg with all the forced delight of a Meals on Wheels worker lifting the lid on a plate of over-cooked sprouts.
From this month, he announced, everyone on state pension who retires will receive up to £15,000 more over their lifetime.
Joyce Bremner found the prospect unappetising. “So if you’re on a pension already,  you won’t get that?” she snapped. “That’s not fair, is it?”
Mr Clegg said he wished he could wave a magic wand (presumably to transport him to a sunny beach in Spain, with his wife, Miriam). Instead he offered a “triple guarantee” of a rising pension in line with inflation or earnings.
Mrs Bremner persisted: “But you’re still discriminating.” No, countered Mr Clegg, the government was sorting things out for “future generations”
“So, it’s to hell with my generation then?” snarled Mrs Bremner.
“Really, that’s not fair,” stammered Mr Clegg.
Mrs Gillan chipped in with a joke: “What about the £100 we’ve been promised for coming here to talk to you?”
Laugh? Mr Clegg turned a sickly shade of green.  It must have been the scones.
Pic: David Moir/Reuters
Posted by Mike at 01:17 No comments: