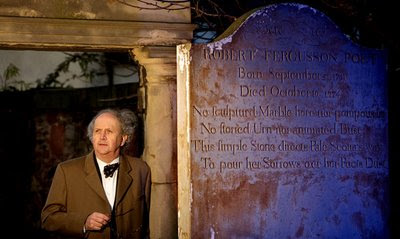 ... Connections with the city are shot through his own fiction. McCall Smith has virtually pioneered “the New Town novel”, with his social comedies set in 44 Scotland Street, a nonexistent tenement building in a very real Georgian street.

More recently, Isabel Dalhousie has come to the fore, an Edinburgh lady with a philosopher's inquiring mind. She flits around a very carefully realised landscape in the Bruntsfield and Merchiston districts of the city, where McCall Smith has made his home, within doors of two other world-renowned authors, J.K. Rowling and Ian Rankin.

Even Precious Ramotswe, the redoubtable founder of the No1 Ladies' Detective Agency - and the original source of McCall Smith's reputation as a writer - bears the mark of the city. McCall Smith spent part of his childhood in Zimbabwe, but something in his heroine's unshakeable moral core reminds many readers of a certain type of Edinburgh lady, most likely to be found living in Morningside, the city's most respectable area.

“Perhaps that's the subtle influence of the place on a writer,” he muses. “People say to me that my Precious Ramotswe novels are about Morningside. I see what they mean, because many of her attitudes would be perfectly resonant with the attitudes of Morningside.”

A literary tour of Edinburgh, with Sandy McCall Smith. You can read more here: Sandy.

This piece was written in a hurry and should have been better. 6 out of 10. Must try harder. But a happy New Year to all our reader.
Posted by Mike at 11:21