"He was a monster in a human skin" 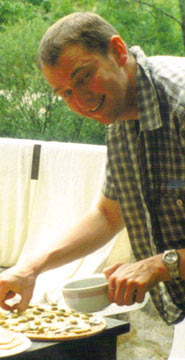 “I see James Rennie as somebody who I thought I knew, but actually I didn’t know that person at all. That person is someone I once spent a lot of time with, a face I know and recognise because we shared experiences together. But he was actually an outrageous and disgusting monster. He had a job and a suit and went to work and bought Ikea sofas and shopped in Sainsbury’s, all the usual stuff. But it was just a façade. That’s how I rationalise it. I never saw this as a betrayal. I think, ‘You weren’t my friend at all. You just pretended to be to suit your own ends.’ He was just a skin and a shell. Underneath, that person was not in any shape or form a person I knew. He is an inhuman and amoral monster.”

That's the father of a child abused by James Rennie, who, with Neil Strachan, was given a life sentence for his central role in a criminal conspiracy to abuse children. Their network of contacts reached out all over the world through the internet, and the information obtained by police in Scotland will ultimately lead to hundreds of convictions in Britain, Europe and America. Read about it here:

How the internet normalised child abuse.
Posted by Mike at 11:17 No comments: 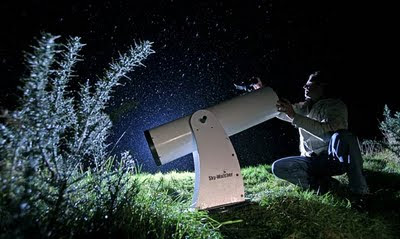 At the end of a garden path, in a home-made observatory overlooking Wee Glenamour Loch, there’s an air of expectancy among a gaggle of astronomers who have gathered. Not because it’s a good night for star-gazing. It’s not: the skies are leaden and the rain is rising in stair-rods. But here on the edge of the Galloway Forest Park, locals are preparing to celebrate its recognition as a Dark-Sky Park, an award unique in Europe, that will rank this lonely corner of South West Scotland alongside just two other areas in the world.

Next month, the International Dark-Sky Association – based in Tucson, Arizona - will convene to ratify the report of its inspectors in Britain. Final tests, which begin tonight in the shrouded hills of Glen Trool, are almost certain to confirm a first batch of readings that registered parts of the vast and lonely forest at Bortle 2 on the international darkness scale. For the uninitiated, Bortle 2 is as dark as it gets on dry land, anywhere in the world; only in the middle of the ocean, where light pollution is entirely absent, could you experience the profound blackness of Bortle 1.

“There will be a little bit of pride. I will be able to say: ‘I live in the dark-sky park’ and I’ll push it for all its worth,” says Dr Robin Bellerby, 69, a former headmaster, and chairman of the Wigtownshire Astronomical Society. “All teachers are missionaries. This can be a solitary hobby , but we like to interest people to join with us and turn their heads up.”

Barring perhaps Cape Wrath, the most remote point of mainland Britain, nothing compares to Galloway for astronomers. Far from large towns and cities – Glasgow and Edinburgh are over the hills and more than two hours away to the north – and with the atmosphere cleansed by frequent rain, the quality of darkness is exceptional.

You don’t need rocket science to explain why the forest park is special says Steve Owens, the UK national co-ordinator of the International Year of Astronomy, and one of tonight’s three inspectors. It’s simple: high quality darkness depends on an absence of light. Light pollution from sodium lamps in the city “is a terrible spoiler for astronomers," he says. “On the clearest night in London, you might be able to pick out only 200 stars.” In Galloway Forest Park some 7,000 fill the sky. Weather permitting.

Sheltered by a stand of pines near the small town of Newton Stewart, Dr Bellerby and his friends feel the benefit. The observatory sits on the edge 320 square miles of parkland in which there are just 414 “points of light”, or houses. When the Forestry Commission contacted the householders asking for their assistance in the dark-sky campaign, all but three agreed to douse unnecessary lights and keep buildings dark.

It is probably helps that, according to legend at least, astronomy is a secret passion for many locals. A couple of years ago, sensors in the roads, that count vehicles, registered a surprisingly high volume of traffic travelling into the forest park in the darkest hours of night. The local constabulary, alerted to possible foul play, descended on a car park by the inky blackness of Clatteringshaws Loch. They found not drug dealers, sheep rustlers or even Stan Collymore and friends; just a group of guys with cagoules and thermos flasks, their telescopes trained on the Crab Nebula

But not tonight, as the rain clatters on the observatory roof. “Won’t see anything, I’m afraid,” says Dr Bellerby, with the cheery demeanour of a man who, for once, is looking forward to a good eight hours sleep.

Last Wednesday, “a lovely night”, he had wiled away the evening totting up the man-made objects he could see above his head: two American military satellites; two pieces of Russian rocket; the international space station – “that’s bloody large” - and a communications contraption. All this in the silent sky above the unsuspecting farmers of Newton Stewart? “Yes, yes,” says Dr Bellerby contentedly. “Two hours after dark you’ll probably see 30 satellites. A deck chair’s super. Just lie there and slowly track them.”

But the real joys come with the Heavenly delights: the Milky way sprawling east to west across the hills; Jupiter, with its moons clearly visible in the southern skies. Or, with the right alignment of sun spots, a stunning display of the Northern Lights. “I never saw it for a couple of years,” said Dr Bellerby. “Then a neighbour rang me. He said, ‘You know how you were complaining about never seeing the Aurora? Get into your garden now.’ And there it was, in all its glory, from west to east and following the coast north. Absolutely extraordinary.”

The final decision of the International Dark Sky Association will be taken on 16 or 17 November. Should Galloway make the grade, the announcement will coincide with the Leonid meteor shower, an annual celestial firework show which promises to be more spectacular this year than it has been for a century. “As if in celebration,” says Dr Bellerby, eyeing the sky expectantly.

I didn't think this article would make the paper. It did, puffed on the front. A shortened version is currently (ie as I post this) the most read article at the timesonline website, Dark Place. Don't these people realise you only get the unexpurgated version on Wade's World?

Photo by James Glossop, who, in the words of Barry Manilow, made it through the rain.
Posted by Mike at 07:53 No comments: 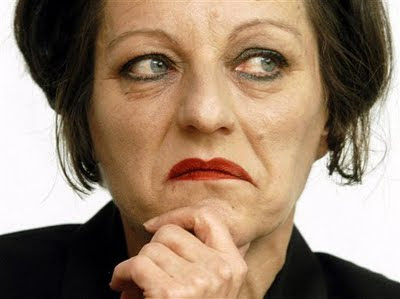 “It is a great regret that the Anglo-Saxon world is so rich in itself but so insulated to the outer world,” says Per Wästberg, chair of the Nobel literature committee. "Only detective stories cross borders. Nothing that is truly well-written and original counts. There are exceptions, but the poor British are often so astounded when it comes to a Nobel winner. They say, ‘Who is that? We haven’t heard of him.’ ”

Behind the scenes at the Nobel Prize for Literature, in the Weekend Review section of today's Times. Inside the Nobel.

Comrades. Does anyone read this stuff? Indeed they do - there's already a link to the "fascinating" original from The Literary Salon.
Posted by Mike at 22:04 No comments:

Adrian Mitchell's theatricality was famously captured on film, when he read To Whom it May Concern, his stirring anti-Vietnam poem, at the Royal Albert Hall in 1965. He is pictured striding away through a rapturous audience of 7,500 after his final rhetorical flourish: “So scrub my skin with women / Chain my tongue with whisky / Stuff my nose with garlic / Coat my eyes with butter / Fill my ears with silver / Stick my legs in plaster /Tell me lies about Vietnam.”

“He was so nervous before that show,” said Mitchell's wife, Celia Hewitt, an actress, who had been unable to attend the reading because she was on stage at Stratford East. “He had been to buy himself a blue suit from Carnaby Street, which he wore. But nobody expected so many people to turn up and the steps of the Royal Albert Hall were strewn with flowers. I arrived late and saw Alan Sillitoe coming out. I said: ‘Was he any good?’ Alan told me: ‘He was the star.’”

More of this story here. The bit at the top is a rather tenuous Scottish link; the rest is quite jolly. Mitchell.

And whether you've read Mitchell's stuff or not, you'll love this. He's reading at the Royal Albert Hall. The guy on acid is Allen Ginsberg. All I see is flames.
Posted by Mike at 15:59 No comments: