A degree in fine whine 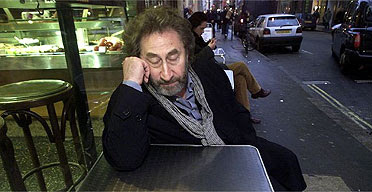 After half an hour or so of conversation, Howard Jacobson has revealed a shortlist of his dislikes. He has no time for youth culture, clubs, or conceptual art. He doesn't care for pretty, young female novelists, or for many other contemporary writers for that matter; he doesn't "do" Irish literature either. But as "the most phallocentric author currently writing in English," (we have it on the word of the Literary Review) Jacobson does at least do sex - though, perish the thought, never titillation.

"You're right," he says. "I don't 'do' anatomical. Go in any bookstore, open any book that girls would happily read on the train, and ... " He screws his face up. "It's pure filth. It's about the size of their organs and women being wet ... I'm absolutely appalled. I class myself as a very puritanical writer. I never write about that stuff, never."

Variously described as a misanthrope, a misogynist and "a snooty Pom" (this last a relic of his teaching days at university in Sydney), Jacobson, by common consent, does comedy very well. His latest book, Who's Sorry Now? is his darkest yet, its humour characteristically drawn from this unyielding, discomforting gaze at sex.

With hindsight, for this novelist, it's an unexpected outcome. Now nearly 60 ("on the cusp of middle age," he says), Jacobson once hoped to be a kind of modern Jane Austen or Henry James. But something about the world that reared him - north Manchester's huge Jewish community - made that impossible.

For years he spent his weekends trailing behind his father, a market-trader, and his evenings cosseted at home by women, while at school he discovered an oral culture which has provided material for his writing ever since.

"The greatest fun we ever had was telling stories about sex," he says, enjoying the memory. "Orations about sex. Even when the sex was going wrong and I was making a complete fool of myself, I remember thinking: 'It'll make a great story to tell the boys tomorrow.' It was the most fun we ever had - but you wouldn't have wanted the women to hear."

But if these were formative days at Stand Grammar School, Jacobson plainly believes they moulded him creatively, not psychologically. In this bike-shed braggadocio, he says, "The fools were always us. I don't think I've ever written about sex when the fool was a woman. If I ever write from a woman's point of view, it might be different."

In this respect, his latest hero, Marvin Kreitman, breaks new ground. In earlier novels, his fictional worlds have always been viewed entirely through masculine eyes. In Who's Sorry Now? women are given leave to consider, analyse and ultimately to reject the hero.

It's a painful if sentimental journey for Kreitman, the luggage baron of south London. We discover that even at the height of his passion for his wife, Hazel, he could wave her a sincerely tearful bye-bye from a Paddington platform; then, an hour later, Kreitman would be resting his head on the bosom of a woman whom he had met leaving the station. By the time the action starts in the novel, he has a wife and five mistresses.

You assume that because he's a womaniser he's bound to be ruthless, reckons Jacobson. But, in the end, the emotionally inexperienced Kreitman can't cope, while the more complete characters - the women - can make the best of things. "I like that thought," admits Jacobson. "Don't ask me if it's true, but I feel it is."

There are particular reasons why Kreitman is Jacobson's most seriously comic creation so far. With each novel, he says, he has investigated a different part of himself. This time he was alone in London reflecting on his marriage to Rosalin Sadler, which was ending after nearly 25 years. In Kreitman: "It behoved me to consider what people thought about this man." His determination affected the creative process. He held back from joke-telling "because it would work against the thing I wished to talk about, which was distress, male upset".

Like so many of his novels, it is inevitable that some reviewers will see Kreitman and Jacobson as interchangeable. It's happened before with the fictional career of peripatetic Lothario Frank Ritz in No More Mr Nice Guy, but the parallels are misleading.

"I hate the thought that one person might buy my book because they're curious about what's happened in my marriage. My private life is (a) mine and (b) has nothing to do with my novels. But I take it as proof that the writing is vivid when people are upset and think it's the real person. That's terrific."

His admirers delight in the economy of his style, the weight of each sentence, the delivery of his punch-lines. It's no surprise that he admires stand-up comedians from Bob Monkhouse to Bernard Manning (a forbidden love that brought forth scorn from his female critics) and as a teacher he developed his sense of timing: "I like to write for my voice," he says.

Yet, even at ease, in the splendid Soho flat which he shares with his partner Jenny, he can seem a fearsomely intellectual figure. At Cambridge University he was a student of FR Leavis, and was "in the front row" when his mentor launched a famous philosophical attack on CP Snow. He's still carrying the torch for Leavis's critique of mass culture (a view which connected high living standards with impoverishment of intellectual life), although he recognises "the old bastard would be appalled by what I write".

After Sydney he taught at Wolverhampton Polytechnic - the Scottish playwright Iain Heggie was one of his students - and since then he has written reams of criticism, devised and presented television series, and written entertaining and learned accounts of his Jewish roots and his love of comedy. There's also the small matter of seven novels, the last of which, The Mighty Walzer, won the Everyman Wodehouse award for comic writing.

Given his schooling, it's no surprise he deplores the new jargon, his "multicultural" critics who accuse him of an "anti-feminist" bias, or of "homophobia". That you can't dislike someone without it being described as a "phobia" is, he says, absurd.

He has a grown-up son, Conrad, by his short-lived first marriage, and is dubious about the benefits of grandparenthood - thankfully Conrad and wife are only talking about children for now, he says. Like Kreitman, Jacobson remains perplexed by the young. He's out of tune with the party people who fill Old Compton Street, and the trendy venues far beneath his top-floor flat. "Being young is not meant to be fun. All that shit the young talk about art, or club culture. When we were young, I had a rare admiration for the idea of maturity. I thought being young was bad. Other people should feel like I did. But they don't, they're too stupid to know what being young is about. That's unforgivable. We all knew the shame of being young - they don't."

So, high in his Soho loft, Jacobson bemoans the world beneath him, its anti-intellectualism, its advertising and marketing, its thrall to fashion. And now he's hitting his stride.

"People are so much more intelligent than their tastes," he moans, with a hint of a Manchester whine. "I asked a friend, 'Why are you reading that?' It was some bookstall rubbish. I said: 'If you had a conversation you'd be more intelligent than that. You'd make judgements, you have pace, subtlety, you'd have surprise. That's just what being you is like, but there you are reading a book which has none of those things. Explain to me the benefit. Why don't you read something which is as intelligent as you are?'"

But if you imagine it might hard to be one of Jacobson's friends, it must be hard to be the man himself, surrounded by all that tat. Imagine how bad he felt when some "intelligent" friends persuaded him to read Harry Potter. "They said how clever it was, full of imagination. But it's none of those things, it's none of the things they said it was. It's shit.

"What it proves is that all along we wanted nothing. Finally, someone has given it to us: no invention, no comedy, nothing."

Ironically, we might imagine that the fragrant author JK Rowling would catch the eye of a man like Marvin Kreitman. But, mercifully for Ms Rowling, Kreitman is a work of fiction.