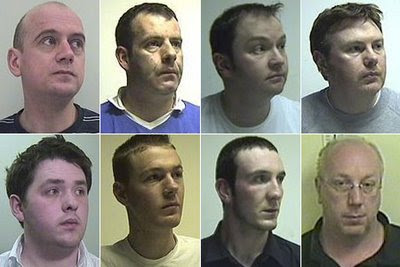 A paedophile gang that carried out a series of attacks on children and infants, including a three-month-old baby, were found guilty yesterday at the High Court in Edinburgh in a groundbreaking legal case.

The abusers, including a respected youth leader — who had met Tony Blair and the Queen — a civil servant, a bank clerk and a Church of Scotland elder, were part of the largest paedophile network to have been dismantled in Scotland.

The convictions were the culmination of an 18-month international police operation codenamed Algebra, which has identified a further 70 suspects in 16 regions of Britain and led to action against another 35 suspected child abusers.

Police and the prosecution hailed the verdicts as an important advance in the fight against child sexual abuse. For the first time in Scottish legal history the Crown brought a case of conspiracy to participate in the commission of sexual offences. Advocate Depute Dorothy Bain, QC, asked for a full risk assessment for two members of the gang; Neil Strachan, who has previous convictions for child abuse, and James Rennie, a respected youth leader and gay rights campaigner who met Mr Blair and the Queen in the course of his work.

The move would allow the court to impose an order for lifelong restriction, which would enable a judge to set a minimum sentence, and the men would be freed only when the parole board considered they were no longer a risk to the public.

The seven men and seven women of the jury sat through nine weeks of evidence, which presented a selection from a total of 125,000 still and video images shared among the eight men on trial, and a log of internet chatroom conversations revealing the extent to which child-sex abuse had engulfed their lives,

These digital records detailed how Strachan and Rennie were able to breach relationships of trust formed with friends, procure and abuse their children, then invite their paedophile circle to assault the children too.

Detective Inspector Stuart Hood, who led Operation Algebra, said that this breach of trust had been horrific and hugely significant, illustrating the plausibility which these serial sex offenders brought to their apparently normal lives.

Rennie was able to abuse the three-month-old baby of close friends without them suspecting him. He gave the child presents, was allowed to change its nappies and babysat for the couple. It was only when police arrived with images of abuse that the couple realised any crime had been committed.

In a statement issued last night the couple said: “For 15 years James Rennie seemed the closest of family friends, and . . . it would be fair to state that he was with us, appearing to give friendship and support, during the most difficult and vulnerable times in our lives. To subsequently learn that he abused our son, and invited others to do the same, has been devastating. As a family we have had to learn to live, and cope with, the effect these horrific events have had.”

This is the follow-up, from today's paper, in which a leading psychologist warns of a new kind of sex criminal emerging from the internet: compulsive disorder.

The blog entry below is the long "backgrounder", which appeared in the Scottish edition, and reveals how Strachan, Rennie and the rest were tracked down.

This was an indescribably shocking case to cover, but there was a grim satisfaction in court that these men were found guilty of conspiracy and are likely to go down for a very long time. As one of the detectives said to me, Scotland will be a safer place because of that verdict. I'm not one to hand out praise to the police every day of the week, but they were absolutely magnificent in this case.
Posted by Mike at 16:50

Please read: lacreusehostsevilcult.blogspot.com to learn about the paedophile cult with a history of child abuse in Thailand, Cambodia, Ireland, Norway and the USA. This cult is now settled in Benevent l'Abbaye (23) central France. My email is: arielacohen99@gmail.com

My email: arielacohen99@gmail.com. I have been investigating the predatory paedophile Godson Cult for over a year and sharing information about the Cult leadership and their entrapment methods. The Godson Cult ran child brothels in Cambodia, Thailand and Ireland under the umbrella of a Christian outreach programme. I would be very grateful to hear from anyone who has first hand experience of Godson Cult activities in France.