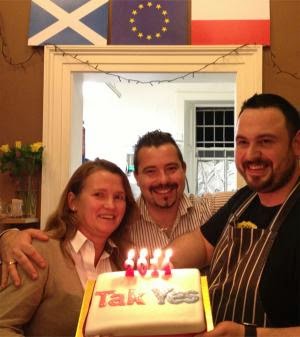 A wave of new arrivals from Eastern Europe could play a decisive role in the fate of the 300-year union between England and Scotland, pushing Alex Salmond over the winning line in the Scottish independence referendum.

For campaigners like Ania Lewandowska, a 29-year-old who works for Alyn Smith, the SNP MEP, these are exciting times. She has no doubt that many “new Scots” will vote yes in September’s ballot.

“They know that change can be for the better,” said Ms Lewandowska, “but also they are not afraid of it. Of course, some are still undecided, but that’s true of any sector of Scottish society. But in my mind most Poles will decide Yes.”

About 55,000 Polish-born people were living in Scotland at the time of the 2011 census, an 18-fold increase since EU enlargement in 2004. By the time of the referendum it is possible the population will have almost doubled again, though because many younger immigrants work in the hotel trade, the total is hard to assess.

Maciej Wiczynski, a passionate SNP supporter has pooled information from local authorities and found 30,000 Poles on the electoral register, though he has still to receive data from Edinburgh, home to Scotland’s largest single Polish community. With these kinds of numbers, the immigrant vote could be decisive.

Mr Wiczynski, a health worker, arrived in Scotland four years ago. At first he says he was sceptical about independence, but “engaged and did my own research,” emerging a passionate Yes supporter. “Money is not the issue,” he said. “It is more to do with social justice. Westminster is not working for the people of Scotland. We are more centre left.”

Tomek Borkowy, 61, agreed. An actor and well-known Edinburgh Fringe promoter, he has been in Britain since 1982 when he fled martial law in his own country. For the last 25 years he has lived in Scotland, sufficient time to come to a view on the political situation.

He drew parallels with 19th century when parts of Poland were incorporated into Austria-Hungary. It was “quite like Scotland and England,” said Mr Borkowy, “we had a lot of freedoms, but still it was not our own country.”

He went on: ”There is a very nice English saying: ‘small is beautiful’. Recently I needed to speak to someone in the Scottish Government. I asked to see John Swinney. In a month’s time, I was having lunch with Cabinet Secretary for Finance. Me, a foreigner, living in Edinburgh.

“Would that have happened if I had approached George Osborne? Absolutely not. Small is beautiful, small is better government. This is now my country. I will vote for independence and I believe most Poles will. This is a no-brainer.”

In Edinburgh. there are plenty of opportunities to test opinion. Michal Uarwat, one of the half of the team behind the Polish sandwich shop at Holyrood, puts his thumbs up for a Yes Vote. His business partner, Piotr Balcer, is a sceptic: “Heart says yes, head says no,” he said.

In Leith, Pawel Nuckowski, 41, took a different approach. This filmaker has lived in Edinburgh for 18 months with his wife and son. Inclined to the Yes cause, he is unlikely to vote. “How would Poles feel if British people moved in and decided on the future of my country?” he said.

In his shop on Leith Walk, surround by Polish hams and pickles, Marcin Wilkolaski took a dim view of the Yes campaign, even though “Tak” – a Yes Leaflet – is available from a community newsstand in the corner.

“Scotland and England have been together for centuries and there has been no war between them – that is very profitable for everyone,” said Mr Wilkolaski. “There are no boundaries in Europe now either. There’s been a huge recession for years, but no fighting. Countries are cooperating. It is better that way.”

Mr Wilkolaski may be in a minority. Such data as exists indicates that Scottish residents born outside the UK are almost twice as likely to vote for independence compared to residents who were born elsewhere in Britain.

Even now, the community remains too small to register in many pollsters’ surveys. The numbers involved, and the transitory nature of a substantial part of the population, make some inclined to dismiss the notion that Pole could influence the result of September’s referendum.

John Curtice, Professor Politics at the University of Strathclyde noted that only 8 per cent of the country’s population was born outside the UK and Ireland. He said: “EU citizens are less likely to be on the register, partly its motivational, partly it’s circumstantial. How much they engage in politics is debatable.”

But if it is a Yes vote, and by a narrow margin, David Cameron will only have himself to blame, said Mr Borkowy. The prime minister should have been prepared to offer ‘Devo Max’, additional powers to the Scottish Parliament.
“What did Westminter do? Decided not to offer more powers. They must be kicking themselves. The stupidity, the lack of forward thinking at Westminster is something we can do without.”

Like Mr Wiczynski, Mr Borkowy easily identified with “we” Scots. “We should escape,” he said. “We have the possibilities now, an historic chance to change everything.”
Posted by Mike at 07:39

The UK stood with Poland in 1939. Have they forgotten?

Can you please get in touch with the Cockburn Gallery. We meet at an evening dedicated to Ernest Levy. We are close friends of Judy Russell. Gordon Cockburn has amassed a remarkable collection of artworks over a period of 20+years. We recently have been at Auschwitz to dicuss the possibility of exhibiting ther. A selection of paintings was on display in Manchester at the Holocust Alliance forum requested by the forgeign office. The Scottish government department EDUCATIN Scotlanf are using some of the imagery as a learning tool and rolling out a programme across Scotland Gordon will participate in a q&a session with school children. Adocu/film is to be shown in the Carrick Centre Maybole on the 8thMay regarding thiscchallenging collection with its main thrust being man's inhumaninity to man, and its anti racial discrimination stance. Tickets ofor this event (invite only) can be made available Judy and her husband will be coming. Can yoou please contact me by e-mail cockburngallery@live.co.uk or by tel 01655 884067